So following arrival at Nicks in Crosby nr Liverpool at 1am in the morning I managed to squeeze out a couple of hours sleep. My head raced with the reality that I would be in Wales later that day. Think I was more excited than Nick.

Several hours later we were on the road in separate cars heading to Aberdaron. Traffic wasn’t that bad and the weather looked promising. Stopped off at the traditional staging posts (Tesco in Caernarfon and Snowdonia Camping Stores in Dinas) arriving at the campsite shortly before 1pm.

Lunch was at the Ty Newydd – I had scampi, Nick had a burger and plans and itinerary hatched.

After a brief tour of the village, the beach and the church, a warm up walk on top of Mynnedd Rhiw and a visit to the top of Braich-y-Pwll to see the view followed.

Tuesday arrived and so commenced the walk. Turning left along the head land we followed the coastal path towards Aberdaron soaking up the views before us and testing our map reading skills to the full. 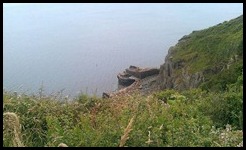 Now, I’ve been coming to the area for many years and I knew that walking the Coastal Path would provide me with new and exciting sights; I wasn’t wrong. Places I had gazed at longingly on Ordnance Survey maps were taking shape in reality: Porth Felen, Pen-Y-Cil, Bychestyn, Parwyd, Hen Borth. Glorious views, glorious weather. Strange remains of an industrial past.

But woe! I lost my hat. My time worn hat. The hat I have owned for over 8 years. Gone. No more. Even though later in the evening a brief walk back to possible places it may have been left produced no fruits meaning that I had to wear my ill fitting Hard Rock Cafe cap until such time as a proper hat could be purchased…

One thought on “There and Back Again and There and back again–Pt2.”