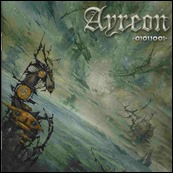 I can’t remember how I first heard about Ayreon. It might be listening to a compilation or something but from the first song that I heard, I just knew that I would like his work.

So I managed to get his back catalogue with this fantastic double album being released at the moment that I began getting Ayreon’s work.

I think that Ayreon, or Arjen Anthony Lucassen, does a bloody good job of uniting various artists such as Floor Jansen, Anneke Van Giersbergen, Bruce Dickinson and Fish under a single project umbrella. Much in the same way as Ivo Russell-Watts did with 4AD and This Mortal Coil. The difference being that Lucassen creates a concept album as the central cusp of the union.

So let us see….changing artists – Check; Concept albums – Check; Bearded and hairy musicians – check; Rock music – Check….so does that make it prog? New prog? In my opinion, yes it does.

01011001 tells the tale of the descent of man into destruction despite alien entities, psychically beaming visions of our destruction into our little heads. It works. It tells a story. With music and catchy tunes.