Back in 1999, Mrs Gnomepants V1.0 and I went to visit her granddad who lived in Scarborough. I think I’d never been to Scarborough before, let alone it’s Fair although we may have got the train there once before a few years previous, I can’t remember. I do have some vague memories of catching a train somewhere but that may have just been Wakefield.

Anyway, on this particular occasion we drove. As I hadn’t driven a car since 1995 (which felt like an aeon previous then) and, I think then, we didn’t own one so we may have hired one. Added to this, being a wary driver, I didn’t really fancy driving on motorways so we drove to Scarborough along A and B class roads instead which was fun, especially as we got to see parts of the UK we’d never seen before and that I’ve completely forgotten about since.

I think it took us 6 hours. Stan, Mrs Gnomepants v1.0’s grandfather, pissed himself at the totally unnecessary drive and route we had taken to visit him. A standard Motorway drive would have taken just under 3 hours.

This was the noughties. At that time there was no cheap satnavs, no smart phones and no Google Maps instead we used old fashioned AA roadmaps (dated 1992) and vague directions printed out from the pirated copy of the fledgeling Microsoft Routemap we had on floppy disk.

One place we drove through was Sledmere in East Riding of Yorkshire. I was so taken by this monument I stopped the car to take this photo with my newly acquired fancy Canon wind up camera with electronic zoomy lens. I later added it to my now defunct Haunted Inns of Great Britain website along with pictures of the Three Mariners in Scarborough.

The monument is a replica Eleanor Cross and you can read more about it here:

The Red Lion in Hunningham near Leamington Spa was once one of mine and the missis’ go to places to take visitors. They used to have these really cool comic book pages stuck to the wall in proto-hipster fashion and a slightly traditional menu. Then the frightful types swamped the town in their Audi people carriers with their children Flegm and Calendula , we moved and the pub became one of those places that serve plates with teaspoons of mushed up food topped with parsley for £50 a pop.

Before that though, and possibly one of the last times we visited the place, we had a visit from my old pal Nick (now playing a grumpy political commentator/photographer/artist in the Scottish play) and we took him to admire the proto-hipsterishness. While there, we noticed there was a model of a tractor by the nearby river and it became the perfect photo opportunity. Surprisingly, I can’t remember the visit ever being in January and looking at the trees and stuff, I think the date on the picture is wrong.

Imagine the best fish and chips you’ve ever had. If it wasn’t from Mary Janes in Cromer, you’re wrong.

I believe that there is an ancient gnostic scripture held in the cathedral in St Davids that says eating fish and chips from Mary Janes in Cromer is akin to 400 pilgrimages to Rome. I was here in on this day in 2017. By all reckoning I’ve made something like 2000 trips to Rome now.

I am blessed and have the belly to prove it. 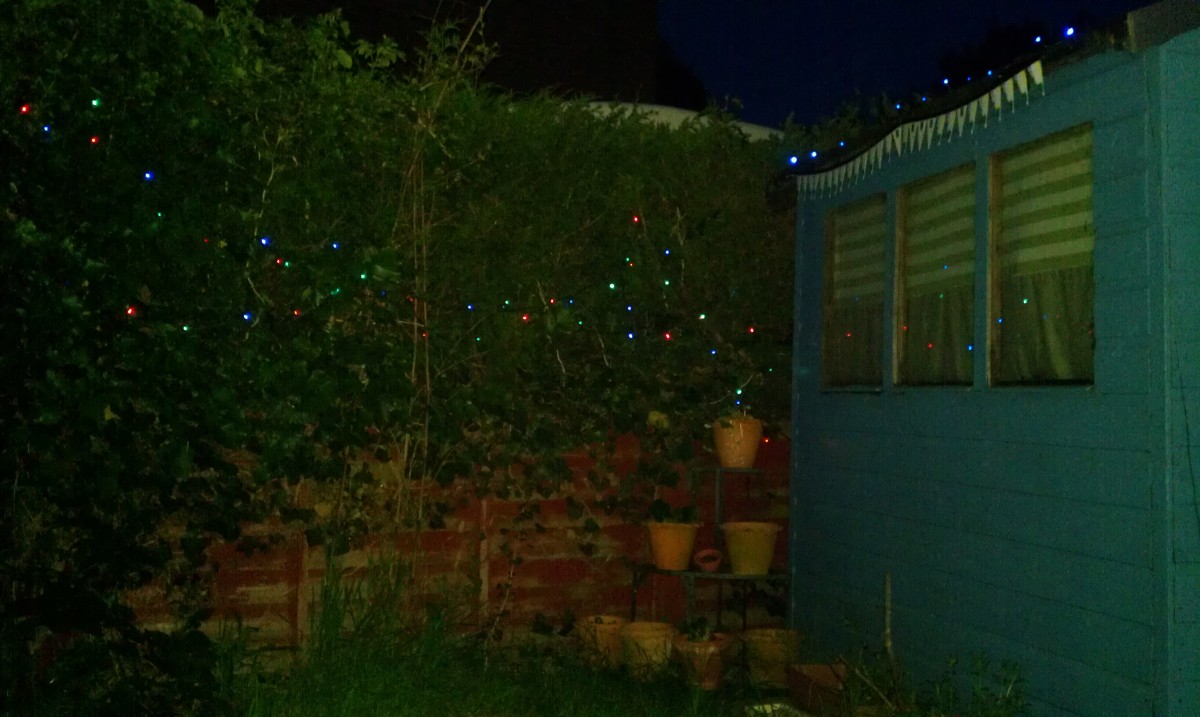 Mrs Gnomepants likes her fairy lights and no garden is complete without a set. Today’s picture is of our shed in Leamington Spa festooned with fairy lights. Some items of note — 1. The plant pot stand with pie crust terracotta pots 2. The top of Keith’s caravan 3. The curtains in the shed window 4. The bunting.

One of the last days of ordinary life for me in Liverpool had me taking random photos of things around me. I’d also discovered after nearly five years of working there, that parking at the back of Syndey Jones Library worked out better than walking back across campus to my car behind Computing Services and struggling with traffic up Brownlow Hill.

On this day in 2006 as I was getting into my car, I noticed a beautiful rainbow, a sign perhaps, that a new stage of life was about to begin or maybe just how sun light refracts off raindrops as it does regularly.

There are many things I won’t do like stick my fingers in the electric socket, swim with radioactive sharks, walk down Granby Street naked or jump off a bridge with nothing but knicker elastic around my ankle. Indeed, there are many foolish things I have done that I won’t ever do again like fall off a waterfall in Wales , ignore a chest pain or abseil down a concrete wall in Port Erin at the age of 10.

Of course, I will look on with admiration as other braver folks than I do things that I wouldn’t. And this is what I did on this day in 2008 when Mrs Gnomepants V2.0 abseiled down Arundel Castle for shits and giggles.

If you get a magnifying glass you can probably make her out on the tower there.

For some reason the auto post for this entry didn’t trigger. Usually I’ll write entries days ahead during busy times and the WordPress scheduled post thing isn’t always reliable. Anyway, I’ll back date these next two posts….

Aberdaron, on the western coast of North Wales, is, as many long term readers will know, my favourite place in the world. In fact, you can probably take it as read that I’d like to be part cremated and part buried. That way I can have my ashes scattered in Aberdaron and the rest can be buried there too with a commemorative bench and a statue and a fountain and a big old banner saying “Stegzy Gnomepants Loved This Place”. Perhaps with a commemorative bandstand too. And a band.

So here I am. Looking out to sea in 2004 when Mrs Gnomepants V1.0 and I took the crumblies for a weekend in Aberdaron at the Ship Inn or Gwesty Ship back when it was a quiet, cheap and cheerful place and still to appear in the Guardian and every middle class affirming Sunday suppliment since.

Evidently in 2010 I was in Sheffield. Can’t think for the life of me why although I was living in nearby Barnsley so it is possible I was there for commuting purposes or for meeting friends.

I’ve been to Sheffield many times in the past. I lived there in 1992, visited again in 1997. It a damn good place to get the train from if you’re visiting the south coast. The people are ace and there was so much to do of an evening, at least when I was young there.

One place I used to visit regularly was the world famous Frog and Parrot which was a legend in its own right. Beers as strong as Buster Crabbe and an atmosphere so dense with cigarette smoke they’re probably still scraping it off the paint work.

When I visited again in 1997 the city had changed so much since my student days. A great deal of the buildings I was familiar with had been bulldozed and even the Frog and Parrot had begun to drop in popularity. I guess it was around this time that I began to realise, time does not stand still when you leave a place and cities and towns evolve. Indeed, Liverpool, my home town, is a shade of the place I remember leaving nearly 15 years ago — new shopping centre, new hotels, old pubs closed and new places opened. 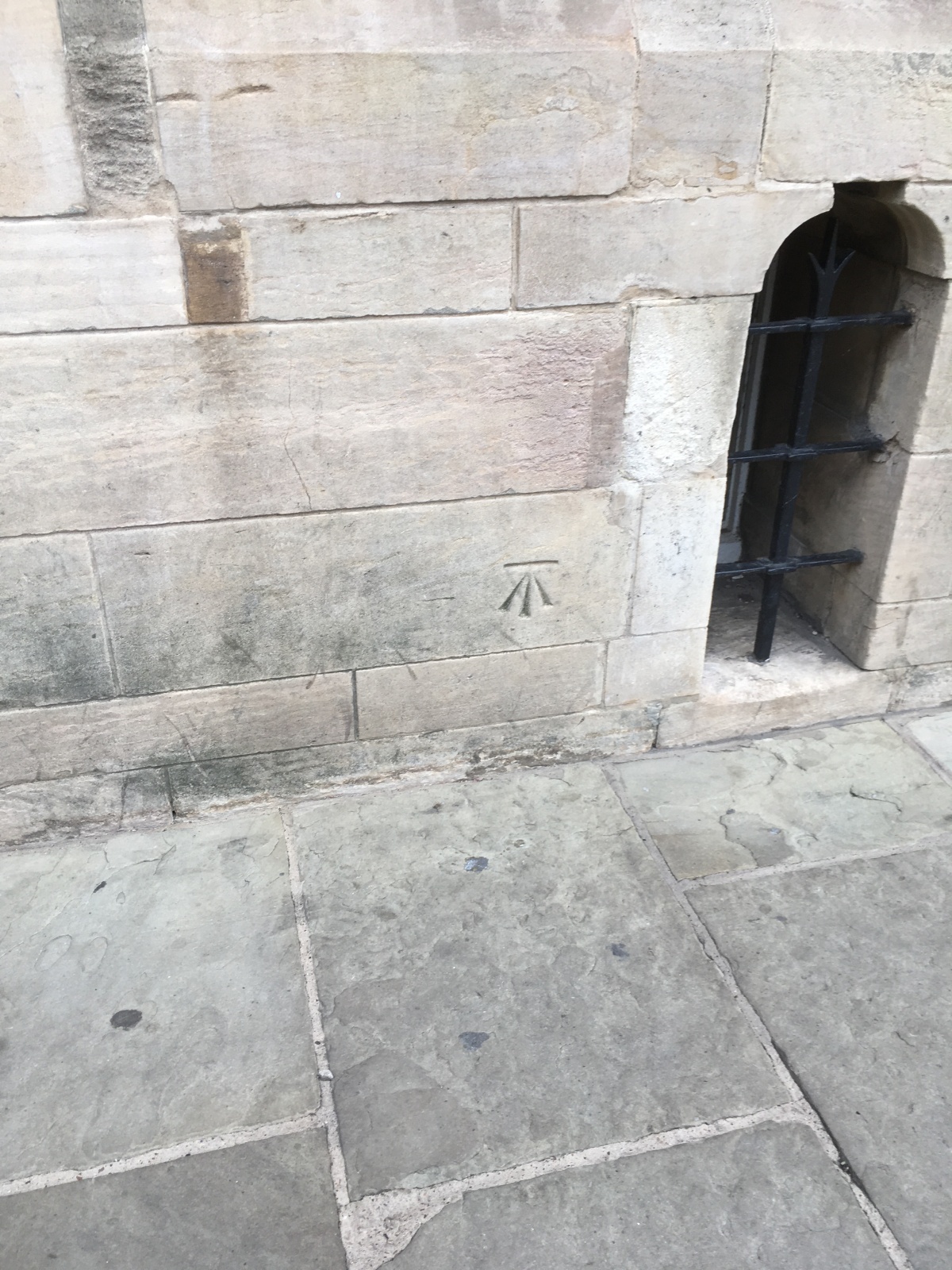 Many years ago, perhaps even around the 1980s, I noticed a curious little symbol on a gatepost near my school. As the internet hadn’t been invented, I had no option but to draw it and ask older people what it might be.

Of course old people are not Google and the various responses I had included — Aliens, graffiti, markings showing where World War 2 bombs fell, natural formations and markings to show were treasure/secret passageways/underground bases (complete with monorails) are located. Which, I suspect, is as about accurate to Google results these days anyway.

Much poking around, the passing of time and asking actually qualified people who work at universities later revealed that the symbol is what is know as a benchmark. Then came Wikipedia and that cemented it for me — https://en.wikipedia.org/wiki/Benchmark_(surveying) Another childhood thought bubble popped.

Sometimes, when I see them, I will go “Oooh! Look a benchmark” and people around me look at me as if I had just escaped from the loonie bin (or psychiatric rehabilitation centre in the modern parlance). This usually then results in the conversation continuing without me, patronising “listening” as I explain or me having to put that nice jacket with the buckles on.

In 2017, while exploring the local-to-me administrative county town of Northampton I saw a benchmark on the Guildhall and took a photo, with the intent on starting an internet based map showing where all the benchmarks are in the UK. Of course, I don’t have the wherewithal, patience or technological knowhow to even set up such an endevour, instead I present it to you here — to gawp at and tell people, with confidence, when you see one yourself in the wild, that the weird symbol shows that nearby there is a secret underground base run by Bill Gates nanobots is and protected by Jewish space lasers….. 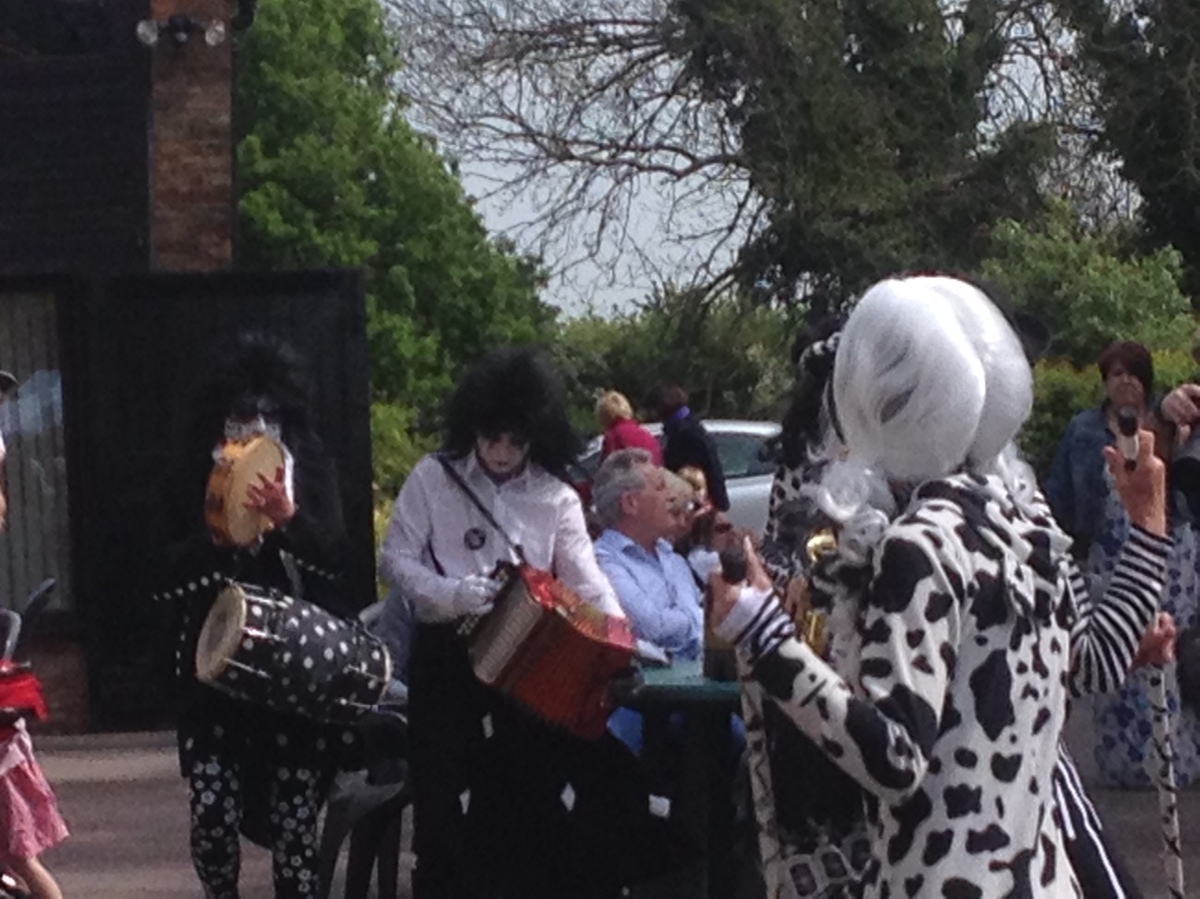 May is that time of year in the UK when villages start to become alive. Hipsters gather their trailers and converted caravans to vend organic vegan fat-hen flavour ice cream shampoo and barbecue slow cooked artisian oven baked allergen free squid rings to shuffling Guardian reading zombies. While village community association members bicker about who is in charge of procuring the orange squash and tombola this year.

May is also the time of year when bearded Arran sweater wearing ukelele and folk instrument players gather to play arcane tunes and songs devoted to John Barleycorn, the Green Man and other ancient deities of agriculture and fertility. They then sometimes dance around a pole waving their hankies or bopping sticks together or maybe they will cart a village teenager around in a wagon before sticking her on a pile of faggots and setting her alight.

Ah traditions. Long may they continue.

Sadly this year and last year most of these celebrations have failed to be performed causing the ancient gods of fertility and abundance to rouse and show their displeasance by causing Brexit, disease and embarrasment to the Prime Minister.

Although, as the plague is now on the wain, it is possible that such village celebrations will reemerge in 2022 and once again, people can wave hankies at each other while dancing around a pole. Lech Wałęsa need not apply.

I can’t remember why we went. It was possibly to see the Bell inn, a haunted inn mentioned in Marc Alexander’s Haunted Inns but it turned out that it was the annual Cheese Rolling day in Stilton. Cheese rolling is where, for some forgotten tradition, people gather to chase a “cheese” down Stilton high street.

Of course this highly dangerous practice is an affront to the gods of Health, Safety and of course, fashion and it seems the last one was held in 2018 — https://www.bbc.co.uk/news/uk-england-cambridgeshire-42788965

Still, I have a couple of photos from the event, mostly of the crap Kiss tribute band and Mrs Gnomepants has a few too. Historians and archivists can fill their boots.