So the last full day of our holiday arrived. Rather than spend another day driving around without clue, we opted to take it leisurely.

I wanted:-
To go for a swim
To eat ice cream
To eat fish
To drink cider
Zoe wanted:-
To go on a boat ride
To see Cornwall
To go to the National aquarium

So we drove once more into Plymouth. 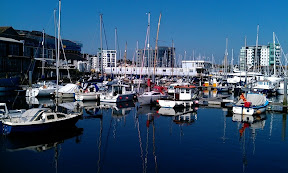 Having parked up paying 9 pounds for a full day parking, we made our way into the Barbican district. We checked the times for the ferry and then went into the National aquarium centre.

It was a stark contrast from the previous day where there was queues around the block this time we walked straight in. we paid our entry fee and made our way to the top of the tour. 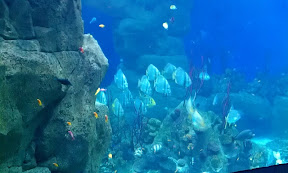 It has been a long time since I have been to an aquarium in the old days you would be lucky to see a couple of goldfish in a spherical bowl and maybe with a couple of crabs. the Plymouth National aquarium centre is full of fish in fact my stomach was rumbling just at the thought of such delights. The previous nights lemon sole was still fresh in my memory and with every sole I saw I was salivating. 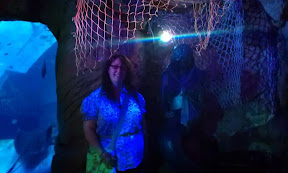 Zoe seemed to enjoy herself. she saw some stingrays and other giant fish and even had her photograph taken with a mermaid. She was like a child in a sweet shop where as I was like a hungry person in a fish restaurant.

The tour at an end, we made our way to the ferry departure point. while there we observed the boats coming and going and was surprised at the small ferryboat that arrived to take us to our destination. We were lucky to get on it was so small. I mean 5 inch ferryboats….how are we meant to fit on a 5 inch ferry boat?

Our destination today was to Cawsands. Again a Cornish misnomer as there was no sands, just sharp pieces of small broken rock.

Cawsands is a small fishing village once on the border of Cornwall and Devon. It neighbours the village of Kingsands. Again a tourist trap; narrow streets, cute buildings, full of tourists. Still pleasant enough we stopped at a pub intending to have our cheap lunch however the pub was very expensive. £6.50 for a Cornish pasty no much bigger than one you might get from Greggs or Ginsters. While Zoe had a couple of pale looking Cumberland sausages and some unpleasant looking chips for £9. 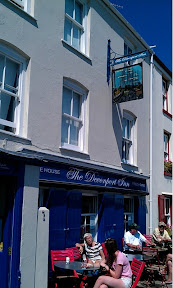 A bit more walking and it was time to get back on the boat. I can’t comment how pleased I was to get back. Even though the ice cream I had was really nice I still felt kind of light in pocket.

Returning to Plymouth we then nipped into the cider bar on the Barbican. We sat outside on the quay watching the world go by. Before long it was time to head off to dinner. again we had chosen platters as our choice for the evening. I opted for the lemon sole having not thought of anything else since the previous night Zoe went for the mixed grill again.

Fully sated we returned to the hotel and took advantage of the spa facilities have an early night in preparation for the long drive home on the Saturday.

And here ends the accounts of the holiday. I hope you enjoyed reading

– Posted using BlogPress from my iPad

So when I was a kid I had a healthy interest in lighthouses. This was piqued by stories in a school book regarding the Eddystone Lighthouse on Eddystone rocks just off the coast of Plymouth.

In case you were unaware the Eddystone Lighthouse has been built four (arguably five) times. The first was made of wood and got washed away during a storm. The second caught fire and melted onto the people trying to put it out, the third developed cracks, the fourth still stands (with modifications such as helipad). The whole romance of the sea, mystery and adventure surrounding lighthouses just fuelled my desire to become a lighthouse keeper. The third lighthouse, Smeaton’s tower, was dismantled and rebuilt on the Hoe for shits and giggles  as a kind of public monument to those lost at sea and a museum of lighthouseololology. Or summat.

Anyway because the tower had been rebuilt on the Hoe, it had always been a place I’d wanted to visit. So when the weather turned for the grot on the Tuesday we decided to continue our previous nights walk along the Hoe after we had found somewhere to eat for breakfast.

Our choice for breakfast was Little Chef. My map of Little Chefs (well…the map on their website) was a bit crap. The two identified on the map had either gone, as in the case of the one at Saltash, Cornwall  or it had the wrong address (as in the one supposedly to the east of Plymouth). So we thought stuff it, and went for breakfast in a quaint cafe in the Barbican district as long as we walked it off.

Our next intention was to go to the National Aquarium. But because of the crap weather the queues to get in were round the block. So the walk to the Hoe took priority.

Walking round the back of the Royal Citadel we made our way towards the Wheel. I wanted to see the Smeaton tower but I wasn’t prepared to pay £3 each just to go up some stairs and down again. Instead we looked at the other monuments and Zoe offered to pay for a ride on the Wheel.

Despite the rain and the clouds there were some good views from up there. I never knew Plymouth was bombed like Coventry during the Blitz. It was interesting listening to the commentary though. I liked how the avenue was designed to be a pathway from the station to the Hoe. It’s a shame that the architects who redesigned Coventry didn’t have similar artistic skills instead of a passion for concrete.

So after that we went into the town centre where I bought a new bag, a nice shirt and some new trousers. I had intended on wearing the trousers that evening but Zoe suggested I waited because the wet pavements would have made them mucky.

That evening we dined on fine fish at Platters. We both had white bait for starters and the seafood mixed grill for mains – Five types of fish, grilled and served with a mountain of chips. Ace biscuits!