So yeah, I had a stonker holiday. Despite an iffy start with Blood pressure threatening to make my head pop the rest of the hols were tiptop.

The first couple of days were spent in Liverpool. Friday night was spent in the company of young Nicholas at the Everyman Bistro. Course I wasnt drinking but never the less the discussions covered all manner of topics ranging from how we both hate our jobs to “poor” farmers and manual work being a doddle.

Saturday came and with it the prospect of departure to the Welsh hills. The weather forecast and traffic reports were not favorable but never the less we braved the journey and I’m damn glad we did. Driving via the Mersey Tunnel (the Runcorn Widnes bridge had 3 hour delays), joining onto the A55 and tootling down the A470 at Conway towards Betws-y-Coed and Porthmadog we arrived in Criccieth just about tea time. The sharp eyed amongst you will recall that Criccieth is the location of the Best Chip Shop in the world.

Of course we stopped there and dined on a feast of delightful foods. I broke my self imposed potato abstinence and had sausage and chips with onion gravy; the wife partaking in the fish and both of us enjoying a pot of tea and some buttered white bread.

Suitibly sustained we set off again and reluctantly headed to the new Asda (the British arm of Walmart) in Pwlhelli.
Pwlhelli has changed. The evidence of the new supermarket apparent with several long established shops now boarded up. It was raining. Horizontal rain. Like most other places in the UK, rain did not spare that part of Wales. However, arriving at our selected campsite an hour and a quarter later, the poor weather broke and glorious evening sunshine put us in a good mood for the holiday.

After erecting the tent and setting up the camping chairs, the wife and I enjoyed a quiet alcoholic beverage and watched the moon rise from behind the not so distant hill of Pen-y-Cil
The next day presented us with a super hot sun. The wildlife came out in force and soon the area was alive with all manner of insects and flying things. After a breakfast of cereal and tea, the wife and I donned our walking gear and set off to Aberdaron along the coastal path. We rested at Porth Meudy. Porth Meudy is a quiet fishermans cove reached by a steep path carved into a river valley between two cliffs. It is here that the Bardsey Island bound pilgrims would board their craft to navigate Bardsey Sound to the abbey thereon. Boats to Bardsey Island still depart from there but we were not Bardsey bound instead we were Aberdaron bound and the prospect of the climb up the steep cliffs required us to rest for a while. Enjoying the surrounds.

Aberdaron had changed. Although a year had passed since my last visit, a fair bit of change had taken place. One change was a sign in the carpark next to the Spa requesting £1 for the privilege of parking. The land had been bought by a foul southerner who realised that they could milk tourists and locals of an extra bit of cash. Another change was the presence of CCTV cameras but the most noticeable change was the crowds of people. The small village (and it is small having only 2 pubs, a newsagent, a church, a postoffice/Spar and two cafés all within 50 yards of each other) had featured in one of the weekend newspaper suppliments and all manner of dreadful types were present. Most notably those with awful children.
Never the less, we partook of ice cream and enjoyed our pre-packed picnic on one of the picnic benches. 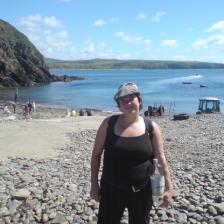 Mrs Gnomepants’ Beauty is dwarfed by the beauty of Porth Meudy 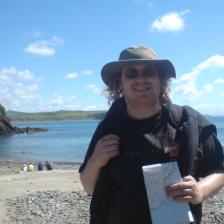 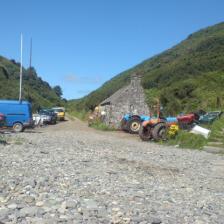 The daunting steep path back up to the headland 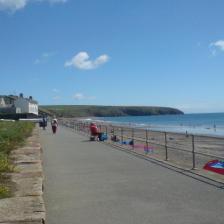 The Promenade at Aberdaron 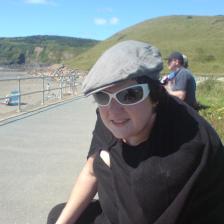