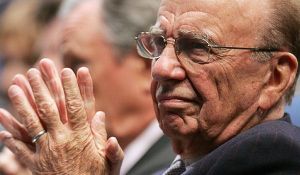 Well it looks like the press (Murdoch) is worried that the Lib Dems are gaining more support than the press (Murdoch) likes. Judging by today’s newspaper headlines Nick Clegg is a Nazi paedophilic ex-priest with sadomasochistic tendencies who would bring naught but ruin.

Mr Murdoch believes, I have been taught, that he has the power to sway elections and tip the balance to his favour. This, it seems has been the case in previous elections in the UK. His support for Thatcher during her incumbency and Major during his 1992 election seemed to show that what his newspapers said was how the voting public voted. Indeed, in 1997 when The Sun switched sides to support the Labour party it is believed that Murdoch’s media empire’s influence saw to Blair winning that election. Indeed, it has been suggested that his support for Obama in his American owned press helped win Obama his election.

Murdoch’s power does not stop at newspapers, FOX and SKY TV. Far from it. Murdoch controls ageing and failing social media giant MySpace something which he paid $580million for. Unfortunately, Murdoch is trapped in this mindset that as long as people consume something unquestioningly and uncritically, they desire something and it will never get tired . This belief, it seems, is why Murdoch was demanding to know why people weren’t using Myspace anymore without being aware of the transient nature of social networking and the and fickleness of internet users. Today’s Facebook could be tomorrows Myspace. (see Johnson, Bobbie (2010) Turmoil at MySpace blamed on News Corporation [On-line] Available at: http://www.guardian.co.uk/technology/2010/feb/14/myspace-news-corporation-owen-van-natta)

So use caution when you consume media. Especially in during the current circus that is the lead up to the election. Don’t take one viewpoint, indeed even my viewpoint for that matter, as concrete. Look around. See what the other media outlets are saying and consider who controls those outlets. Notice the tricks they play like using surveys to back up what they say – were you questioned? Did you take part? Are you in the minority? Notice how they build people up then discredit them somehow when opinion doesn’t go the way they would prefer.

I know some will say “Oh I don’t pay any attention to media” but I’ll argue that you do. Maybe not directly but the people you interact with may have. I know some will say “I don’t get involved in stuff like elections or media because no matter what I believe it won’t make a jot of difference. Well maybe. But think about how like shoals of fish all move in one direction but soon as the predator appears they scatter causing chaos and disturbance in their formation.

The other danger is that Murdoch strongly believes that users should pay for the content on the internet. Now while I like the idea of charging you lot 50p to view my diatribe I am an advocate of freedom of media. But then I am also an advocate of philanthropy, something which Mr Murdoch doesn’t seem to believe in either.

When one man controls the media, the media becomes his voice. When only one voice is heard; there may as well be nought silence.