At the weekend the wife, an out-of-town friend and I nipped out to the lovely town of Royal Leamington Spa for a mooch around the Peace Festival.

The Leamington Spa Peace Festival, for those who don’t know, is an annual rain causing event held in the Pump Room Gardens and features all manner of new age nonsense such as yogurt weaving, kaftan liberation, tofu swallowing and vagina floating.

As well as hearing local folk bands and pan pipes, it’s also a good opportunity to see the latest trends of the anathematic capitalist hippies are pushing onto today’s youth. For example, stove pipe hats seem to be entering a renaissance, gong showering is breaking into the wavy world of healing and knotted dyed rags are this year’s rad hair fashion (again).

With hipsters now denying their own existence in a Schrodingeresque fashion (you’re either a cool cat in a box or not, depending on who is observing you), goths morphing into the less threatening emo collective and  neo-nerd-geeks becoming vogue thanks to Big Bang Theory the time is right for a new collective. One that is so trendy and beyond cool that it is off the spectrum entirely, but one whose emergence will be unobserved until it has spread to a point where it becomes commonplace.

Of course it’s not just teenagers and infantilised twenteenies trying to be trendy. While beards may no longer be the fashion and half-mast trousers and arse showing waistlines have gone the back into the wardrobe for several years, the smart Sunday shirt wearing, middle class middle age organic free range grass eating daddies of the world appear to be taking their midlife crisis to the high street. Quitting their well-paid, high stress jobs and opening cafés using the stylistic ideals of designer hipsters to influence their décor.

At least, that’s how it appears from my visit to the overly trendy café, Bread and Butter on Regent Street in Leamington Spa. In what appears to be a former butcher’s shop a couple of doors down from the fishmongers, Bread and Butter just oozes huge blobs of “I’ve been to that London and seen how the well to do spend their leisure time”. I was reluctant to go in but guests take precedence and so began an experience I am about to recount.

Stepping through the door, it is difficult to see what’s going on due to the low level lighting. Windows provide free light and white tiled walls help reflect it around the important areas mostly to the till area which is sat on a thick wooden counter.

Garden furniture, the crap type that rotund people will find difficult to sit on comfortably or safely, are the choice of the day, enhanced only by artistically and purposefully strewn autumnal leaves on the floor. These, it has been debated, appear to be swept up of an evening, sieved to remove dust and detritus before being replaced after the floor has been mopped, cleaned and dried. Wankery.

Menus come in the form of a sheet of A4, minimalistic in choice, as per instructions from Blumenthal and Ramsay, but in a way that is limiting to the consumer.  Old favourites ruined by the addition of wankery. A bacon club sandwich with wanky bread and avocado. Wanky salad, served with wank. Poncey toasties with cheese and a selection of teas that would ordinarily cost you about 30p to make yourself in a mug sold at the exorbitant price of £2 for a mingy scale model cup.

I had the “slow roasted” pork  bap which came garnished with stale musty tasting crackling. This was obviously a new definition of “slow roasted” as to me, slow roasting means that the meat is succulent and melt in the mouth. I’ve chewed shoes less tough. Supposedly reasonably priced at £6.70.

During my years of eating out and writing about my experiences in the food world I’ve always said that you can’t make a restaurant or café trendy and popular by charging a lot of money for a small portion of food. Sure, you’ll get some tossers who think “Hey! This is so trendy and cool I’m going to come here every day because £6 for a stale pork butty is the lifestyle I want to lead”. But these people, like the hipsters they gave birth to, are dying out. 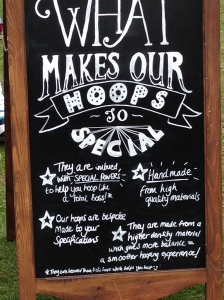 Although a greasy spoon café has its place, I’m not calling for that, I’m calling for some balance. Wankery has had its day back in the noughties when we found it ironic and amusing. Wankery today is just a road to disaster and mockery. Just as sticking the words “Organic” and “Free range” before every item on your menu is passé so is bringing the outside in, tiny portions and over pricing. The people you think you’re appealing to have grown out of this kind of approach and, much in the same way as faux-Victoriana and retro tea rooms have faded from popularity, so will wankery in décor. If it isn’t naturally worthy of brown leaves being tastefully placed on the floor, then don’t do it.

As we left and made our way back to the car, I observed corduroy trouser, gingham shirt wearing, late thirty something middle class graphic designer dad with his stay at home on an allowance yummy mummy  what lunches and writes crap fiction wife pushing  their child-with-a-neo-trad-name-like-Edna in its free range organically padded for their own safety comfort five wheeler monster stroller making their way into the café. Exactly the kind of clientele the café is trying to attract.

Would I go again? No I wouldn’t.