At lunch time I usually sit in my car and eat. Today was no exception, however the view through my window was quite remarkable with all the hoar frost.

Anyway, I thought I’d snap it and attempt to upload it using an Android app I hadn’t actually used yet.

The result, as you no doubt saw, was a picture of blood. Meh

Anyway, I thought what I would do is try and take a picture every day showing the changing views 😀 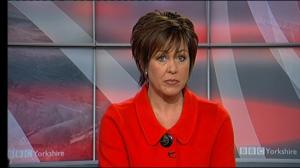 The cringeworthy Charlie Stayt and Susanna Reid were being particularly awful on Friday morning on BBC Breakfast. Everytime I switch on my telly on a Friday morning I just see them being vacuous, poorly researched and generally crap at their jobs. Now it would be big headed of me to say that as a media & television graduate I would be a million miles better than them so I won’t. Instead I’ll say it as it is. A skip full of decomposing monkeys would be a million times better than them.  Their interview technique and loud brashness just make BBC News look and sound like it’s presented by morons. Which, conversely, it is.

What’s worse is the local news. In case you’ve been hiding in a box in Sumatra for the past two weeks, Yorkshire has been under a blanket of snow and ice recently. For the past week everyone’s favourite Tango lass, Christa Ackroyd (who had the pleasure of meeting me face to face last year), has been presenting the evening show from the comfort of outside her house. Every bloody story has been about the snow. How it’s effecting the region and how schools have closed and how some postman used a surf board to get from one side of his village to the other and so on and so borkingly forth.

That is…until Wednesday of this week, the snow almost melted…but then Harry Gration, who had also been presenting the evening programme from outside his house, announced “The snow causing CHAOS to the region has started to go but new problems affect the region with…”

Can you guess what it was?

The terror meant that people crossed a road on their hands and knees. These same people were featured on the programme and Harry Gration presented the article as though the Queen had died.

It seems like those that produce the news have been going through a really dry patch. I imagine that we will hear more and more about Haiti for the next 2 weeks unless something worse happens. Of course…they could switch to this story.

Thought I’d share some pictures of the lovely snow. Fortunately I don’t have to go to Huddersfield this week. Snow and blurgh don’t mix.

Thought I’d share some pictures of the lovely snow. Fortunately I don’t have to go to Huddersfield this week. Snow and blurgh don’t mix. Some photos of the snow (mainly for lotusmoppet)

Taken last night. You should see about a centimetre of the stuff,
but I didn’t want to get my slippers wet getting a close up

You can get a better idea of the depth from this picture showing my car.
You can still see bonnet. This morning my car resembled a snowy hillock.

Aerial shots taken from my bedroom.
Gives you a better impression of Lane with No Name snowiness.

This morning: The snow is well thicker than it was last night.

Call that snow? I’ve seen much worse. Still the country has ground to a halt.
Well. London has. Bunch of poofs they are.

This evening when I’d come back from uni.
The heat from my car has melted some of the snow.

The front garden taken this evening.

Look. It’s fucking freezing ok? Yeah yeah ok robynz and maybe zelest and think4yrself probably would think that -2 was the height of summer but no…..not here….-2 is like fucking Arctic. There’s Eskimos Innuit trying to hunt fucking fish through ice holes in the back garden. Trying to tell them a) that there are no fish b) There is no snow to cut the holes into c) there are 70 miles to the nearest stretch of salt water d) to fuck off my property before I call the police and immigration just doesnt seem to put the fuckers off.

It’s so bloody cold, the kettle steams when it’s not on the hob! We’re saving fucking electricity by illuminating the rooms with our red noses.

So in an effort to heat up the body (and of course to celebrate birthday’s) tonight I’m going to fill my body with curry. It is the only solution. Hot spicy warming curry. That is if my feet don’t snap off at the ankles with this bloody cold.

(and maybe some cups of tea)

(and some nice chocolate)

END_OF_DOCUMENT_TOKEN_TO_BE_REPLACED

In the UK, generally, if it gets a bit blowy, more than 2 inches of snow or a slightly larger than usual puddle forms on the road outside the town hall, then the infrastructure of the entire country grinds to a halt and we all stand round tutting and blaming the government or indeed the council for not doing enough to prevent such a disaster. Similarly, though rare in occurrence these days, if the temperature falls below -3°C we get a bit panicky, pensioners start dying and we close a few roads here and there for safety reasons.

In reality, we in the UK are a bunch of gnesh girlies when it comes to the weather. Take the other extreme, when it gets a bit too warm we whinge on about how “Bloody hot it is” and we lock ourselves in our unairconditioned (air conditioning is a Merrican thing and a totally unBritish thing to do) offices with the windows wide open, sighing and dripping sweat all over our work.

To think once we had the largest Empire this world has ever known! Pah!

No wonder we’re so shit at cricket.