The first day of walking was most enjoyable. Tired by evening we dined on barbequed steak and salad. Not as straight forward as it should be. Partly because the crappy Tesco Instant Barbeque was impossible to light in the light breeze that had picked up during the day but after an hour of cooking later the still rare steaks were ready.

Wednesday’s plan was simple. Turn out of the campsite, left along Lon Uwchmynydd and turn right along the coast before heading north towards Porth Oer. Now we were entering completely virgin territory for me. The lack of accessible roads and paths in this part of the country meant that I was unfamiliar with the scenery on this part of the route.

However the mist was rolling in from the sea.

For those of you unfamiliar with this area of North Wales, the weather here is bizarre. You could be stood in blazing heat in one field and then in the neighbouring field shrouded by an eerie cloud of cool sea mist. So while walking through dramatic scenery here the bizarre mists shrouded the views of the sea. Occasionally we would enter into sloping valleys with babbling streams and haunting bleats from hidden sheep only to hear the gentle lap of waves from the sea against the shore. 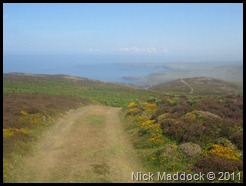 Eventually we rose above the clouds by climbing Mynydd Anelog. Blazing heat seared our souls as we strode across Welsh coastal moorland. Views over to Porth Orion and Mynydd Carreg enhanced by gorse and heather covered terrain complimented by hazy blue skies. 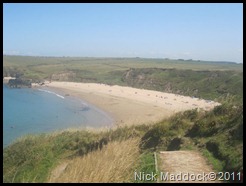 An hour or so later, limbs aching and skin tingling with sunburn we reached Porth Oer where we dined in the beach cafe and discussed plans for the remaining day of the holiday. By evening we were both very tired and following a slightly disappointing meal at the local seafood restaurant Pen Bryn Bach opted to walk the 2.5 miles into Aberdaron for a pint returning to the campsite by walking dark lanes.

The next day was hat hunting day. Scouring the local towns and villages for a shop that sold suitable hats. Pwllheli and Abersoch provided no bounty except for beer, money and cider. A new hat seemed an impossible dream.

Friday arrived and we decamped. We drove to Porthmadoc wherein, following the successful attainment of a new hat, we gorged ourselves on a mighty cooked breakfast. Fully sated we parted our ways Nick heading back to Crosby and I returning the long way back to Leamington Spa.

6 hours drive later…I arrived. And so began the second leg of my holiday.