Mrs Gnomepants: So we might get our lovely period bath re-enamelled rather than buy a new one. Its a lovely original cast iron bath.
Ma Gnomepants: Why would you want to do that? Oh buy a new one instead.

Mother-in-law – Why have you made your own cake? You’d have been better off buying a shop bought one.
A bit later..
Sister-in-law phwarr this cake’s lovely
stegzy Oh yes. Its delightful. Really chocolatey and moist. I’ll have another slice there should be plenty seen as your mum would prefer a shop bought one.

Ma Gnomepants Get yourself a new vacuum cleaner
stegzy Why? Whats wrong with the one I’ve got? I’ve only had it for 4 years
Ma Gnomepants It doesn’t suck right. I think it’s broken
stegzy Mum…Its either full or the pipe is blocked. Bit of poking about Ah yes. Look a big ball of cat hair and paper blocking one of the pipes. And look, it sucks….Thats saved me £100

My mum and the wifes mum are part of what I call the “Throw away” generation. The throw away generation tend to be aged between 50 and 80. If something breaks, whereas their parents would have endeavoured to fix or mend the broken item themselves or have the item repaired by someone else, the “Throw Away” Generation simply chuck it out and buy a new one. 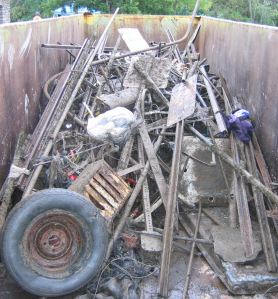 My Dad was born on the cusp of the arrival of this generation. If a hole appeared in one of his socks he used to darn the sock and prolong its life by a further 2 years. Similarly if something mechanically simple breaks, my dad will take it apart and have a look to see if he can repair the thing. This attitude saved me loads of cash as a kid when my over used joysticks for my Commodore 64 would break. A simple twist of the screws and a blob of solder would often fix the problem. Likewise with bicycles, bits of furniture, plumbing, general repairs or whatever, if a simple patch and repair could be affected it would. My mum however, is the opposite. Even the slightest tear of fabric in something and it must be thrown out and a new one bought. Note I said thrown out. Rarely are such items given away to anyone other than family and even then prolonged usage would receive comments such as “Why don’t you buy yourself a new one?” or “I see John Lewis have a sale on “.

I suppose the post war years and the post rationing years promised that generation exciting and disposable things. Instant Car! Just add water! or Our sofas are made of 100% cheap and nasty non-biodegradable polymer based materials. SO cheap! Why buy one? Buy four! If one breaks…chuck it out! Hurrah!!. Their rationed parents and grandparents looking on in bewilderment. “Hey wow look Ethel! Dorothy has bought yet another labour saving device! Gosh do you remember when you had to spend all day Wednesday working on the mangle?”.

So we come full circle again.

Things break
I’ll have a look at the thing.
Assess if I can fix it.
Ask my dad if he can fix it.
Buy a new one but keep the old one for spares.
Get bollocked by the wife for keeping shite that I’ll never get round to fixing
Dispose of thing in recognised place of refuse disposal.

Even when in our house where we have separate bins for recyclables and compostables. After the olds have visited we tend to find things in the wrong bin. I think if Liverpool council hadn’t had a “If you don’t compost we’ll frown at you” campaign, the olds would still be chucking out plastics and glass to landfill. Although to be fair my dad has always separated his bottles and papers, but mum just puts anything resembling rubbish into the bin. I think my dad separates the bottles because when he was young he could take bottles back to the shop for the penny deposit and newspapers were always useful for a variety of purposes. Whereas my mum sees that as a bit lower class and although my mum comes from the roughest arse end of Garston, she sees herself as having worked her way up to near the top and is quite proud.

The wife’s mum tends to just lump everything into the same bin despite constantly being told by her daughters that there are greener ways to do things. Though to give her her due she does switch everything off at the wall when she has finished. Not something I can hold my hand up and say I do religiously and she doesn’t drive a car (my dad drives a petrol guzzling Ford Focus) so I suppose that off sets some of her carbon foot print slightly.

I read this…..Is it right? Are your olds part of the throw away generation? How about you?